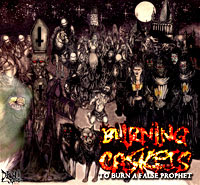 Death Metal. A genre originally very close to thrash metal, pioneered by legends like Death, Possessed, Morbid Angel and Entombed, it has changed tremendously. Being mixed with just about every other metal genre there is, death metal is one of the most versatile metal genres. Groovy, black, thrashy, doomy, brutal, or however you like your death metal, the countless bands of this genre has it all.

Burning Caskets from Canada delivers 26 minutes and 14 seconds of non-stop, brutally forceful death metal. Being part of one of the biggest metal genres ever, Burning Caskets has a lot to proove. It's hard to not sound like other death metal bands, but this groovy riff-powered band mixes elements of many well known death metal acts to great avail. With vocals akin to those of Chris Barnes - formerly of Cannibal Corpse and now of Six Feet Under - , one of the grandfathers of groove death metal, this Canadian death metal band has a bright future. This 7-track album of uncompromising mid-paced death metal has it all. Pounding drums with great variety, killer riffs, ear-tearing vocals and a sound to go with it all.

Vocals have always been my primary point of critique for death metal bands. If the vocals suck, I simply can't listen to it. Therefore I'm pleased to hear greatly varied vocals with everything from the afforementioned Chris Barnes-ish vocals to throat-shredding vocals like those of Svencho from the Belgian death metal giants ABORTED, and Burning Caskets even incorporates a few breakdowns and gangshouts into their music making it all the more diverse.
Burning Caskets is by no means your everyday death metal band. Sure, they may not be revolutionizing the genre, but they manage to mix a lot of elements that just work well together.
It seems cathy riffs and straight-to-the-point song structures are what the Canadian quintet are all about. With a recipe consisting mostly of easily memorizable riffs, gruesomely neckbreaking headbanging parts and simple structure "To Burn a False Prophet" is an album that appeals to fans of Six Feet Under, Deicide and Cannibal Corpse. Hard-hitting from start to finish, the tasty - although sometimes a bit chuggy - riffs will please most fans of mid-paced death metal.

Released only 2 years after the band started, 2011's "To Burn a False Prophet" is a generally great uncompromising album. Flowing slowly along like a river of molten lava, the tracks fit well together, but to say Burning Caskets have a way of varying their song structures would not be exactly true. I've praised the album a lot, but my main beef with this release is the lack of variation. Death metal, being such a versatile genre as I have previously stated, leaves a lot of room for mixing things up a little. But then again, Burning Caskets have found their sound and are sticking with it, and it works really great.

Having mostly praised the album, I will have to mention that I would've liked it if the album was a bit longer. The lack of variation between the songs is a bit of a let-down, but this badass bout of sepulchral Canadian death metal works magnificently.
Death Metal is Eternal. 8/10