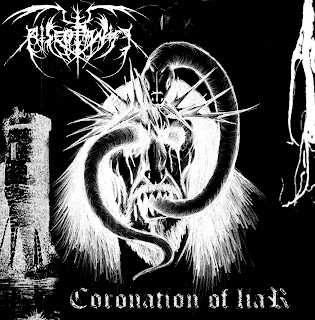 To me it's always interesting to see and hear the way a band progresses and evolves between releases. Some bands develop a completely new style between albums while some stay with what they know.

The Greek black metal act Rise of Malice, originally created by Satwe, Norlander and Storfeth in 2009, are now two demos into their career of blasting black metal. 2010's demo "Coronation of Liar" features 4 original songs aswell as a Darkthrone cover; The 4 tracks are a manifestation of 90's black metal worship, sounding very akin to Norwegian legends like Darkthrone, Gorgoroth and at times even Immortal. Vocals, drums and guitars all come together in a greater unity to nourish the incredibly cold atmosphere that many bands of the genre have come to embrace. The vocals are a classic display of the trademark distorted raw screams, and the guitars present wholesome tremolo-ridden riffs that are mostly very catchy aswell as giving the impression that the music is not something that the band just does as a hobby.
Rise of Malice's first demo is an overall magnificent interpretation of the classic black metal bands, and while they aren't trying to hide who they're taking inspiration from they still manage to give their own personal touch.

Narrowly avoiding the stereotypical lyrics about satan it seems Rise of Malice have gone for more interesting and esoterical themes, which is more commonly seen with depressive and often non-Scandinavian black metal bands. I've found that this tendency to abandon the now-cliché topics of satanism and anti-christianity in black metal is on the rise in more reasent years. When Silent Echoes, the first track of the second demo, 2012's Rise of Malice, toned in on my speakers I thought for a moment that the Greek band had taken a turn toward depressive black metal like Xasthur, Wedard or Nortt. But as soon as the intro track faded into the second track, the mystically magnificent "Forest of Mist", those ideas were blasted to hell by a torrent of guitars, drums and vocals.
What hit me first thing was the more progressive riffs. With their self-titled demo Rise of Malice have developed a more destinct riff-sound aswell as moved into turf more unorthodox. The progression from Coronation of Liar to Rise of Malice, while subtle, is noticable. Their newfound more untraditional niche of black metal has also brought a rawer sound with it.
I was surprised to find that their sound has changed from their old material to the new. I already mentioned the rawer sound, but the general balance between instruments isn't quite the same anymore. The drums sound like they've been downplayed a little, though certain fills are marginally louder than the rest. The vocals also seem to have been altered and made less distorted.
The second demo offers 4 new tracks written by Rise of Malice and another cover, this time of Immortal's Withstand the Fall of Time. The 4 new tracks, while much the same as the 4 on Coronation of Liar, still show a certain amount of musical evolution within the band. It sounds more like the band has found their own sound on the self-titled demo.

Over all I guess you could say that the first demo is more catchy and easy to approach while the second is a tad bit more esoterical. If you are one of those people who think black metal can't be about great riffing, then Rise of Malice may very well be the band that changes your mind. 8/10 guitars.

The listener will find Postscrypt lurking in their own dark fantasies in the abandoned tenebrous parts of the mind. In this ungodly place the band experiments with a great variety of elements, ranging from blast-beats, Type O Negative-ish vocals, symphonic instrumentation, throaty screams and clearly gothic parts. However, none of these tendencies are dominant and thus makes it hard to justily classify their particular style.

Each individual effort of the bandmembers are genuinely okay in their own rights, but together I get the feeling that Postscrypt are not sure where they're going musically as a collective. Different impressions make for a spacey sound, and while I don't normally mind I think it's somewhat misplaced in this instance.
The quartet have their moments. I was not completely bored at all times, but I wasn't excited at any time either. I feel that though their flow is solid the band never really reach their climax. It's like they're building up an atmosphere and building expectations only to then let the song "fall into itself" again. I never really came to look forward to the chorus or any particular place in one of the five songs on the promo. The music just kind of... Flows along like a small, quiet river and probably serves better as background music.

All in all I'd say that Foreplay to Auralgasm is an honest although ultimately uninteresting effort, at least to me. Their repetoire seems to be limited to mellow and low-tempoed metal with little going on other than the occassional good riff or interesting (and excentric, to say the least) vocal effort. I'll hand them one thing - Their music made me think of such acts as The Sisters of Mercy, Type O Negative and one particular Katatonia song once in a while, but generally their music just feels like a watered down version of something else. 5/10 guitars.

Note: The picture shown is NOT the actual coverart. Thrash and black metal have gone hand in hand more or less since the beginning with Venom's thrash song "Black Metal" and Hellhammer's thrashy proto-black metal style. The Canadian band Durvasag follow up nicely on this early trend with their first release, the 2011 demo "Pure Fucking Thrash".

Playing in the sloppy style of early Venom the Hungarian-named band have some terrific riffs but are really held back by poor sound and dodgy drum and vocal work, and what I mean by "sloppy" is that timing doesn't seem to be their main focus or so to speak. The drums sound like they were programmed by someone who doesn't have a very good feeling with drumming, which is odd considering that the drums on the 5 cover songs sound like they are made by an actual drummer.
I don't mean to be nitpicking, but the album art is horrendously uninteresting. It doesn't really make me want to listen to the music if I didn't know the band in advance.

There's nothing wrong with the song structures, lyrics, riffs or choruses in their own rights, but unfortunately they aren't very well executed maybe except from the guitars. I know I talk alot about the guitars in Durvasag but they really seem to be the bands main strongpoint.
Also there's the matter of the five cover songs on the demo. I don't mind covers no matter the quality, but they will often take away focus from the bands own music and the same is indeed the case on Pure Fucking Thrash. Their choices of songs to cover also tell me that Durvasag is indeed inspired by a variety of classic black and thrash bands, though this is also evident in their music itself.
All that being said I recon Durvasag has potential and would probably be a pretty good live act.

Listening to Durvasag's demo is kinda like eating candy that is still in it's wrapping - You get occassional sweet tastes, but the experience is overall unpleasent but leaves you wanting more candy but without the wrapping. Therefore I can't give this demo more than 5/10.

DURVASAG official site
Download the demo and listen for yourself HERE
Spawned by Jakob Goul at 12:29 0 comments

Music has become progressively more aggressive since the dawn of time, more or less. There will always be individuals who seek to push the boundaries. But with genres like powerviolence and grindcore is it even possible for music to be more extreme without seizing to be music, like the noise genre? The bands featured on this split are certainly pushing the limit with their individual mixes of grindcore, noise and droney industrial. It's something called noisecore and the title says it all.

It starts off with Culo from Chile. Culo delivers 18 songs coming in at almost 3 minutes. Their style is mostly headpounding noisecore with vocals screamed at the top of the lungs and saturated with inaudible guitars and blasttastic drums. The Chilean band sets the tone and grindmasters Disinterested Handjob from the land Down Under quickly follow with their 6 equally short bursts of rapidfire, though their general outlook is abit less noisy than Culo.
The Equadorean band Menso Noise offers a lengthy track mostly consisting of a guy talking in portuguese with concentrated blasts of grind. On the next quest to destroy music is the American band Gorgonized Dorks which is somewhat a surprise on this release as the music could probably best be described as industrial drony noise with occassional explosions of ear-tearing screams and distorted instrumentation. Quite apocalyptic, really.
Going in a different direction the Danish shit-themed grindcore band Fækal Omsorg (Fecal Care in English) are the only band on the release to have actual riffs and what could very well be actual song structures. The Danish toilet-warriors have a more well-defined sound and a much better vocal performance than most of the bands on the split.
Next comes Drongo, another Australian grind-mutant. Drongo's 11 cellphone mic-quality songs sort-of stand out from most of the music on this split by having parts that sounds predominantly black metalish. The last two bands, the Americans "Infecting the Dissected" and "Video Nasty", are more of the obvious Anal Cunt worship that's generally going on here on this split. Borderlining plain noise these two enemies of melody and harmony offer their cacophonous paroxysms of noise as a final prayer and sacrifice to the gods of noise.

I must say that rating and grading a split like this is a rather troublesome task. The music is utterly chaotic and mind-numbingly vile, but since this is most likely the goal it would seem that the bands of the release have succeeded. And then, if I give them a low grade like 3 or 4, would it be seen as a great compliment or a grievous insult?
For the most part I'd say that it was very difficult to enjoy this split. Perhaps that was intended. Be that as it may, I enjoyed Fækal Omsorg's part and I was rather surprised to find that I also enjoyed the one track by Gorgonized Dorks.
All in all I think this split deserves 3/10 guitars. Whether this is good or bad, I'll leave for the readers to decide.