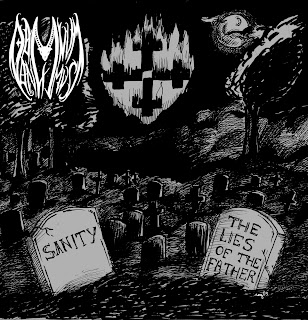 America has made itself very noticable in the later years of black metal, a genre which is moreso seen in conjunction with Scandinavia in Northern Europe. With bands like Absu, Ludicra, Leviathan and Xasthur, the Americans have proved their rightful place among the titans of black metal.

With no previous releases but this, Sanity: The Lies of the Father, this latin-named band makes its' way unto the scene with sombre classically-inspired black metal. Though I use the term "black metal" loosely, as Damnum Animus doesn't use guitars at all, but instead replaces it with classical instruments such as violins and pianos. The distant haunting harsh vocals and the double bass powered drums are actually the only thing about this upcoming American band that makes it black metal.
That being said, the vocal performance is amazing - Fitting for depressive black metal, this is an element that especially makes Damnum Animus stand out from the crowd. The vocals are incredibly well produced and fit so well into the atmospheric experience of the EP.

The drums tend to become a little monotonous with the near constant pounding of double bass pedals, but in this line of music this is not necessarily bad or even uncommon. I think it adds to the atmosphere and utter melancholy of the music, and depressive black metal - although I wouldn't refer to Damnum Animus as such - isn't exactly known for great variety. But other than that the drums still sound mechanic and repetitive, and I suspect the involvement of a drummachine.

Even though the classical instruments, mostly dominated by stringed instruments like violins, but in one occassion also what sounds like a trumpet, have overtaken the role of the guitar, I think that just a little guitar once in a while couldn't hurt. I can see, however, why one would choose to not incorporate guitars in music with such a heavy presence of neoclassical elements, as it could very easily turn into symphonic-sounding black metal like Limbonic Art or Anorexia Nervosa.

What is striking about the debut EP is, as I have previously hinted at, the chillingly cold atmosphere, reminding me of wet mist-covered northern forests. The composition of the classical elements adds to this feel, and I'm generally mildly impressed by the way it's incorporated into the music as it doesn't seem out of place in any way. The neoclassical parts of the 3 tracks mostly feature two or more layers of instruments, which I find is somethat that many people fail to achieve.

Soundwise and productionwise I feel Sanity: The Lies of the Father is consistently of good quality. I wish the first track wouldn't end so abruptly and the second track wouldn't start out of nowhere, because these facts ruin the otherwise good flow of the EP.
This EP proves to me that Damnum Animus really has something to offer. While neoclassical black metal certainly isn't untravelled lands, it surely isn't fully tried out, and I think this American one-man band does a lot to seek out the darker corners of the genre in all aspects.
What really bothers me about the EP is the drums. The drummachine lacks the feel of a human player, and feel is what this type of music thrives on, but this being the first release ever by Damnum Animus (which loosely translates to "Damned Soul", I believe) I think there's room for improvement, and I think Damnum Animus will release more and even better material in the future.
The lack of variety and the unfeeling drums is the only thing dragging the EP down from a 7 or an 8, but it is by no means bad, and therefore Damnum Animus - Sanity: The Lies of the Father recieves 6 out of 10 guitars.

Tracklist:
1. The Last of My Kind
2. Thoughts of a Dying Heart
3. The Lies of the Father